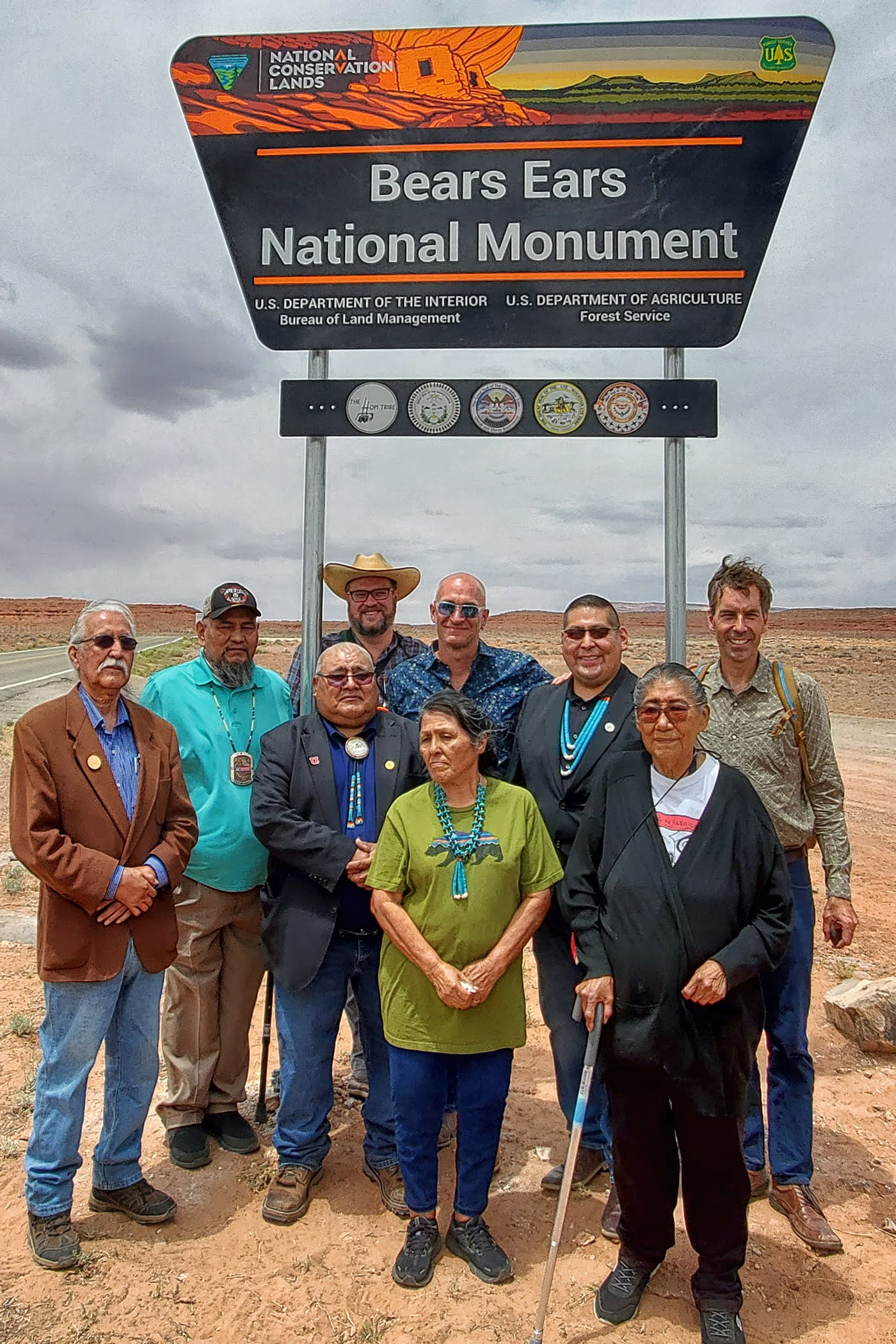 On June 18th, Tribal leaders from the Bears Ears Inter-Tribal Coalition met with officials from the Departments of Interior and Agriculture to sign a cooperative agreement between the five Tribes of the Coalition and the federal agencies managing Bears Ears National Monument. The agreement formalizes Tribal co-management of Bears Ears and will ensure that the monument’s management is guided by Tribal expertise and traditional knowledge.

Following the signing ceremony at the Ute Mountain Ute’s White Mesa Community Center, Tribal leaders, federal officials, and a throng of well-wishers drove south of Bluff for the unveiling of the new signs for Bears Ears National Monument. The signs had been sitting in a BLM warehouse for more than five years as the fight to restore the monument unfolded against the Trump administration.

“Today, instead of being removed from a landscape to make way for a public park, we are being invited back to our ancestral homelands to help repair them and plan for a resilient future,” said Carleton Bowekaty, co-chair of the Bears Ears Commission and lieutenant governor of the Pueblo of Zuni, according to the Washington Post.

On June 6th, a federal district judge issued a decision that tackled two related RS 2477 issues: (1) SUWA’s renewed motion to intervene “as of right” in the long running RS 2477 lawsuit known as the Kane County “bellwether” trial, and (2) SUWA’s request that the court allow us to more fulsomely participate in the ongoing depositions being taken in related RS 2477 lawsuits around the state. The judge denied our renewed motion to intervene and similarly denied our request to be able to cross-examine the state and county witnesses in the depositions.

Utah’s RS 2477 lawsuits—the largest suite of federal court litigation ever brought by the State—seeks to leverage a provision in the 1866 Mining Law and claim title to more than 12,000 rights-of-way statewide. Some of the most contentious claims are located in national parks, national monuments, and national recreation areas as well as designated and proposed wilderness areas.

We believe that the June 6th decision is inconsistent with 10th circuit precedent from 2019 and 2020 holding that SUWA is entitled to intervene as of right in another RS 2477 lawsuit. In 2021, the United States Supreme Court declined to re-examine that decision, which we thought would finally resolve this issue of SUWA’s right to intervene. Our next step is to ask the court to allow the 10th circuit to once again review the intervention issue. In the meantime, preservation depositions will be ongoing this summer across the state and SUWA will continue to have a presence to raise objections and confer with the Justice Department attorneys about lines of questioning for the witnesses.

The Bureau of Land Management (BLM) is scheduled to hold its first onshore oil and gas lease sale this week. Across the U.S., the agency plans to offer 173 parcels covering approximately 144,000 acres of public lands for leasing. Utah was largely spared this time, with only one small parcel planned for sale. However, it’s important to remember that the BLM is not required to sell any parcels for development because it retains broad discretion to manage public lands to protect our environment and climate.

Yes, gas prices are high at the moment, but that is a separate issue entirely. The fact is, oil and gas operators do not need new federal leases or drilling permits because they are not developing the ones they already have. In Utah alone, according to BLM data, operators are currently sitting on more than 1.3 million acres of undeveloped public land leases and stockpiling hundreds of unused (but approved) drilling permits.

Two New Podcasts Explore the Spiritual Side of Wilderness Advocacy

The heart behind activism can sometimes be overlooked, but it’s often what grounds us in why we do this work. That couldn’t be more true for the Episcopal Diocese of Utah. This spring, they passed a resolution in support of America’s Red Rock Wilderness Act (ARRWA) and Grand Staircase-Escalante and Bears Ears National Monuments.

Joining this month’s Wild Utah podcast to discuss the importance of the resolution are three people from the Episcopal Church in Utah: the Very Reverend Tyler Doherty, the Dean & Rector at St Mark’s Cathedral; Ron Barness, a longtime member of St Mark’s who serves on the vestry and is chair of the Creation Care sub-committee for the Episcopal Diocese of Utah; and Forrest Cuch, a Ute tribal Elder, Senior Warden at St. Elizabeth’s Episcopal Church in Whiterocks, Utah, and a member of the Creation Care sub-committee.

Closer to home, our latest Bristlecone Firesides podcast features a chat with Terri Martin, SUWA’s Intermountain West organizer, who is retiring this year after decades of service to Utah’s wild desert landscapes. In this episode, Terri tells us about the spiritual and ecological value of Utah’s wilderness and what she has learned during her years of working with SUWA and other organizations that defend sacred landscapes.

As the sun reaches its summer solstice peak and the first hints of monsoonal moisture fall on Moab, the changing of seasons beckons reflection. Springtime ushered in a whirlwind of work for our Stewardship Project volunteers, and nine projects into the field season our momentum isn’t slowing.

Our crews celebrated the restoration of Bears Ears and Grand Staircase-Escalante National Monuments in their own special way: by rehabilitating the lands scarred by off-road vehicle damage and inventorying cultural sites to better inform the management decisions ahead. Another highlight of the season thus far has been our large-scale effort to implement protections at nearly 40 worksite locations in the recently designated Labyrinth Canyon Wilderness Area over the course of a 4-day project.

Looking ahead to the mountains for summer and the canyon country for fall, we will continue tending the land in the Muddy Creek Wilderness, Cedar Mesa, the West Desert, and Bears Ears National Monument.

Visit our Stewardship Program page to join our on-the-ground efforts to protect and restore these remarkable public lands!