President Trump has announced that he is coming to Utah in early December to eliminate vast portions of Bears Ears and Grand Staircase-Escalante National Monuments. This action is an outrageous attack on our treasured public lands and an appalling affront to Native American Tribes. It also dismisses the more than 2.8 million people who petitioned President Trump to keep our national monuments fully intact. If you live in Salt Lake City or can make the trip, join us in resistance at 1pm on December 2nd in the Utah State Capitol Rotunda. Help send a clear and visible message that we intend to “Honor Tribes” and defend the priceless scientific, cultural, and ecological legacy these monuments represent.

Earlier this month, the House Committee on Natural Resources passed one of the most egregious dirty energy bills Trump’s Congress has attempted yet. H.R. 4239, the so-called “SECURE Act,” prioritizes fracking above all other energy sources, decimates rules that regulate drilling, guts public involvement and input on development through the National Environmental Policy Act, and worst of all, gives the states permitting and oversight authority over energy development on federal lands.

And that’s not all. The bill also weakens protections for marine mammals, expands offshore drilling in America’s oceans, undoes protections in the Arctic, and eliminates the ability for a president to withdraw areas from drilling off the coasts. It’s a veritable smorgasbord of destruction.

The SECURE act could come to a vote on the House floor at any time. Tell your representative to vote NO on this blatant attempt to hand over America’s natural wonders to fossil fuel developers!

>> Read more on our blog

Since our last Redrock Report, cosponsorships for America’s Red Rock Wilderness Act have continued to roll in. The Senate version has gained two new cosponsors, bringing the total to 22. The House version has gained 23 and just last week passed the milestone of 100 cosponsors; 101 representatives have now signed on to the bill!

If you are the constituent of any of these senators or representatives, please take a minute to thank them for their work in protecting America’s redrock wilderness.

Taking Wild Utah to the Streets for PARK(ing) Day 2017 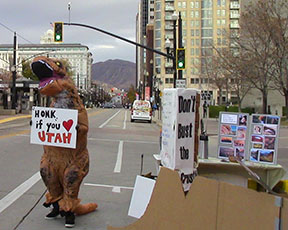 Our educational display turned a public parking space into public land for an evening, in keeping with the spirit of PARK(ing) Day celebrations worldwide. This “park” reminded the general public that four out of five of Utah’s national parks began as national monuments.

Hot cocoa was served to curious pedestrians as they learned about how to get involved with the president’s upcoming visit to Utah. We also dreamed of a world where the president and Utah politicians had a peaceful moment of reprieve (and revelation) in the wild. Until that happens, we’ll keep at taking a stand in defense of our public lands! 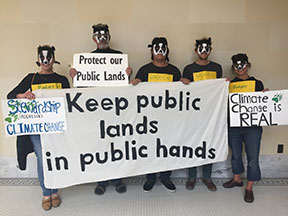 A band of badgers confronted Utah state officials last month about their efforts to turn federal public lands over to the state to own or manage. “How can we trust the state with our public lands when they assert that badgers loot artifacts and deny that human driven climate change is damaging the health of our public lands and forests?” asked the badgers. “The answer is that we can’t.”

The badgers traveled from their burrows in southern Utah to the State
Capitol for the meeting of the Commission for the Stewardship of Public
Lands—a misnamed commission seeking ways to advance the transfer of
federal lands to the state of Utah.

>> Read more about badgers speaking truth to power on our blog

Limited Year-End Offer: Get a Free SUWA Beanie with Your Gift Membership Purchase! 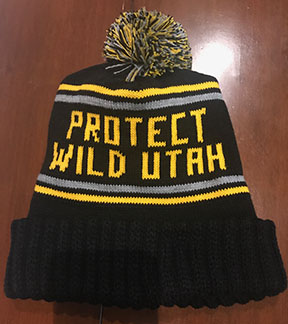 Looking for that perfect non-commercial, non-toxic, non-fattening, environmentally friendly gift-that-keeps-on-giving? A SUWA gift membership could be just the thing! Each gift membership is just $25. We’ll send a welcome packet with a newsletter and “Protect Wild Utah” sticker to your gift recipient.

And if you place your order between now and Dec. 31st, we’ll throw in a free SUWA beanie! (Note: the value of the beanie is not tax-deductible.) Order by Dec. 8th to guarantee delivery by Christmas. Offer good only on gift membership purchases made during this limited time period.

>> Click here to take advantage of this special offer