Close your eyes and picture a highway. It’s probably paved and graded, a corridor for station wagons and minivans. It has a shoulder, lanes, a speed limit. In short, it looks nothing like this: 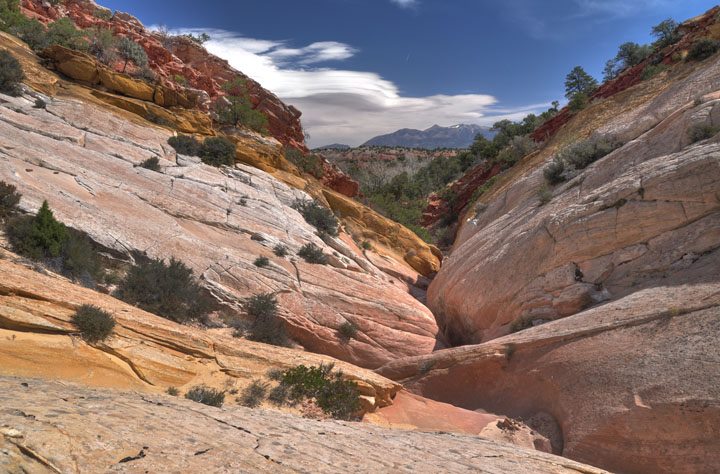 But to Gov. Gary Herbert and the State of Utah, this beautiful rocky channel in Capitol Reef National Park is a road—one of more than 25,000 phantom “roads” the state announced it will sue over in an attempt to gain a foothold on Utah’s remote and beautiful federal lands and make inroads to subverting future wilderness designations.

Utah and several counties justify this madness with “R.S. 2477,” an 1866 law stating “[t]he right of way for the construction of highways across public lands, not reserved for public uses, is hereby granted.” That made sense in the homesteading era but the statute has outlived its purpose, and Congress repealed it in 1976 subject to valid existing rights.

But Congress couldn’t imagine that this gully in Capitol Reef—and the thousands of cow paths, old seismic lines, dry stream beds and one-man joyride trails like it in the suit—would be the kind of claim that would follow. Utah is brazen in its bogus claims: Mark Ward, an attorney for the counties involved in the suit, blustered that all the “roads” in the lawsuit are “decades old, legitimate and well-established public transportation routes on which a broad cross section of Utahns and Americans depend for access, law enforcement, recreation, resource use and resource preservation.”

Really? A broad cross section of rabbits, lizards, and deer may well use these routes, but Utahns are certainly not using them to take their kids to school. This suit is not about transportation—it’s about barring protection of our magnificent federal lands for the benefit of extractive industry, developers and off-road vehicles, and once that happens, these lands are gone for good. Please help us stop Herbert and the State of Utah today!